The Effects Of Concussions On The Brain

Athletic activities are crucial to achieving one’s healthy lifestyle. With more than 5 million people affected by sports injuries, however, athletics may pose certain risks to physical injuries and financial implications.

According to the research from UCLA, approximately 3 million people experience traumatic brain injuries every year. In another study published by Sports Medicine UPMC, it’s estimated that 50% of concussions are undetected and 2% of high school athletics will get concussions from playing contact sports.

In addition to serious health issues, concussions also play a part in facilitating a financial burden for the institution and individuals. Specifically, a concussion was reported to cost $800.00 – which included visits to urgent care, concussion clinics, getting imaging tests, and other therapy sessions.

What is a concussion?

A concussion is a traumatic brain injury caused by a hit to the head or, less commonly, an intense shake (through car accidents, for example). Given the nature of the injury’s cause, concussion often leads to chemical changes inside the brain and even damages the brain cells.

While many concussions go undetected, symptoms of concussion are reported to invove seizures, loss of brain functions, a mild to strong headache, vomiting, and/or drowsiness.

Diagnosing concussion can be done through symptom analysis, an overnight hospital stay for observation, or even imaging tests to make sure that there aren’t any fractures, bleeding, or swelling in your brain.

Physiology of a brain and how a concussion can affect it

To understand the effects of concussion, it’s important to know the brain’s anatomy. At a basic level, the brain is composed of four major sections: cerebrum, cerebellum, brainstem and diencephalon. The cerebrum – the largest area of the brain – is composed of two hemispheres each of which has four lobes. Depending on the regions that the concussion affects, the damages to the brain might differ: 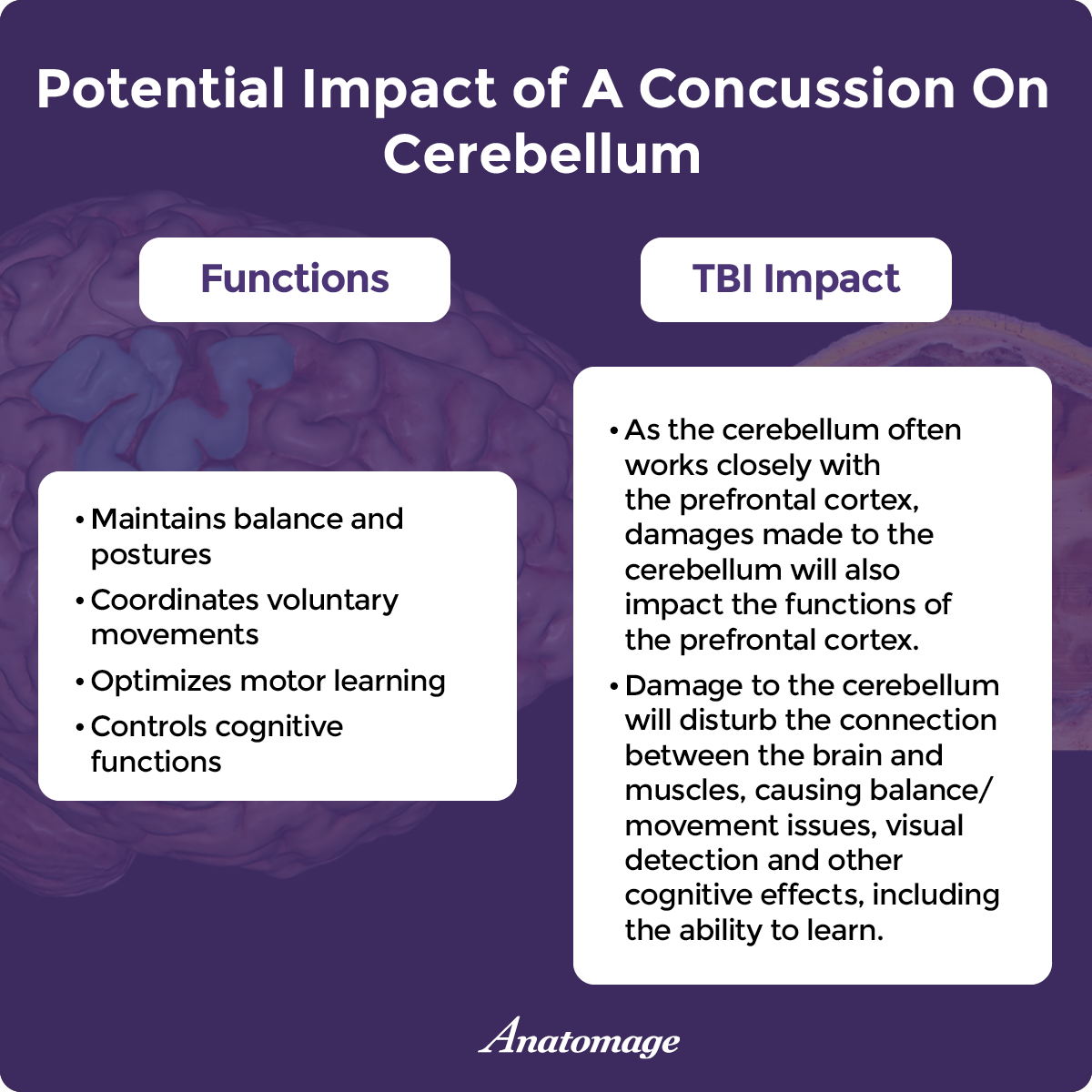 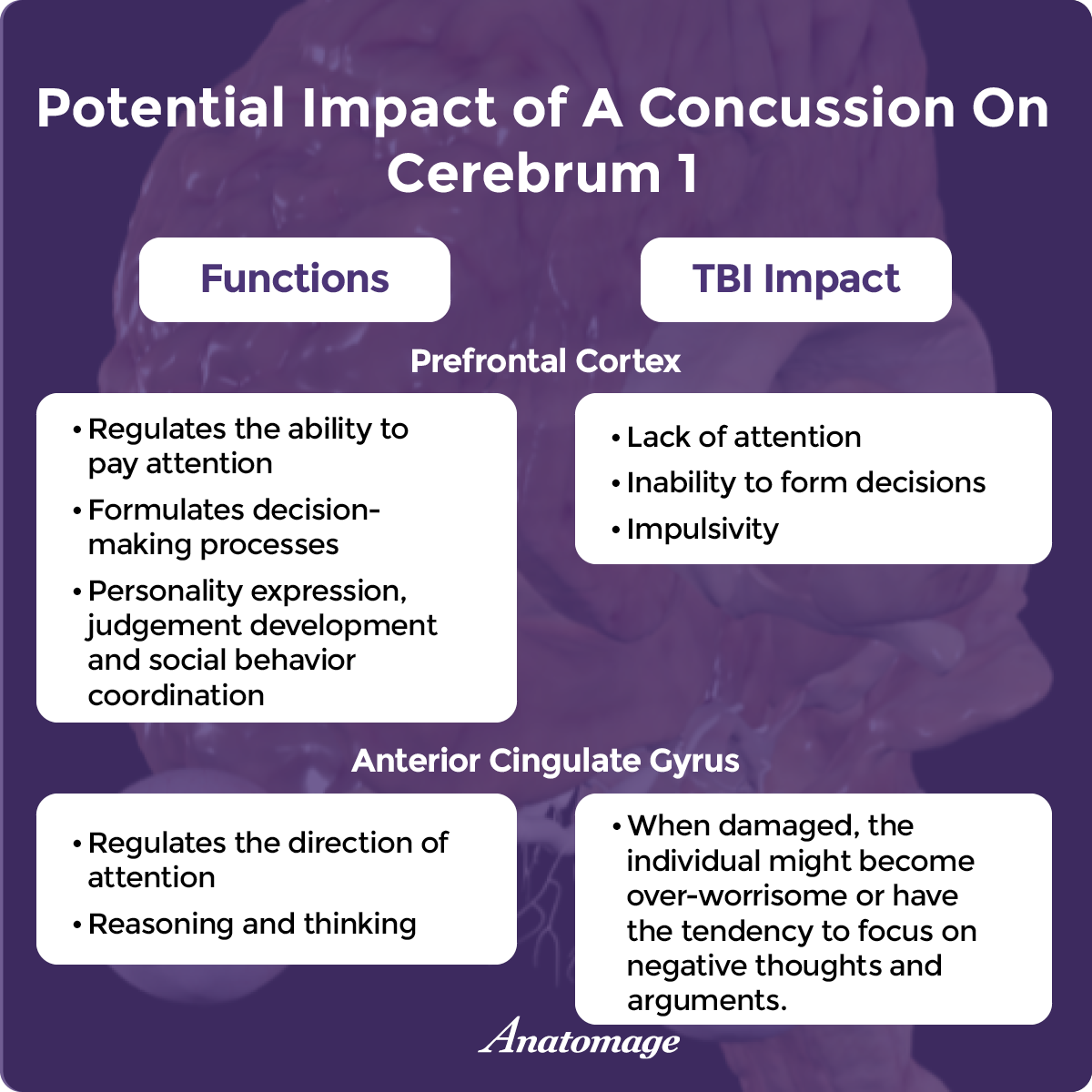 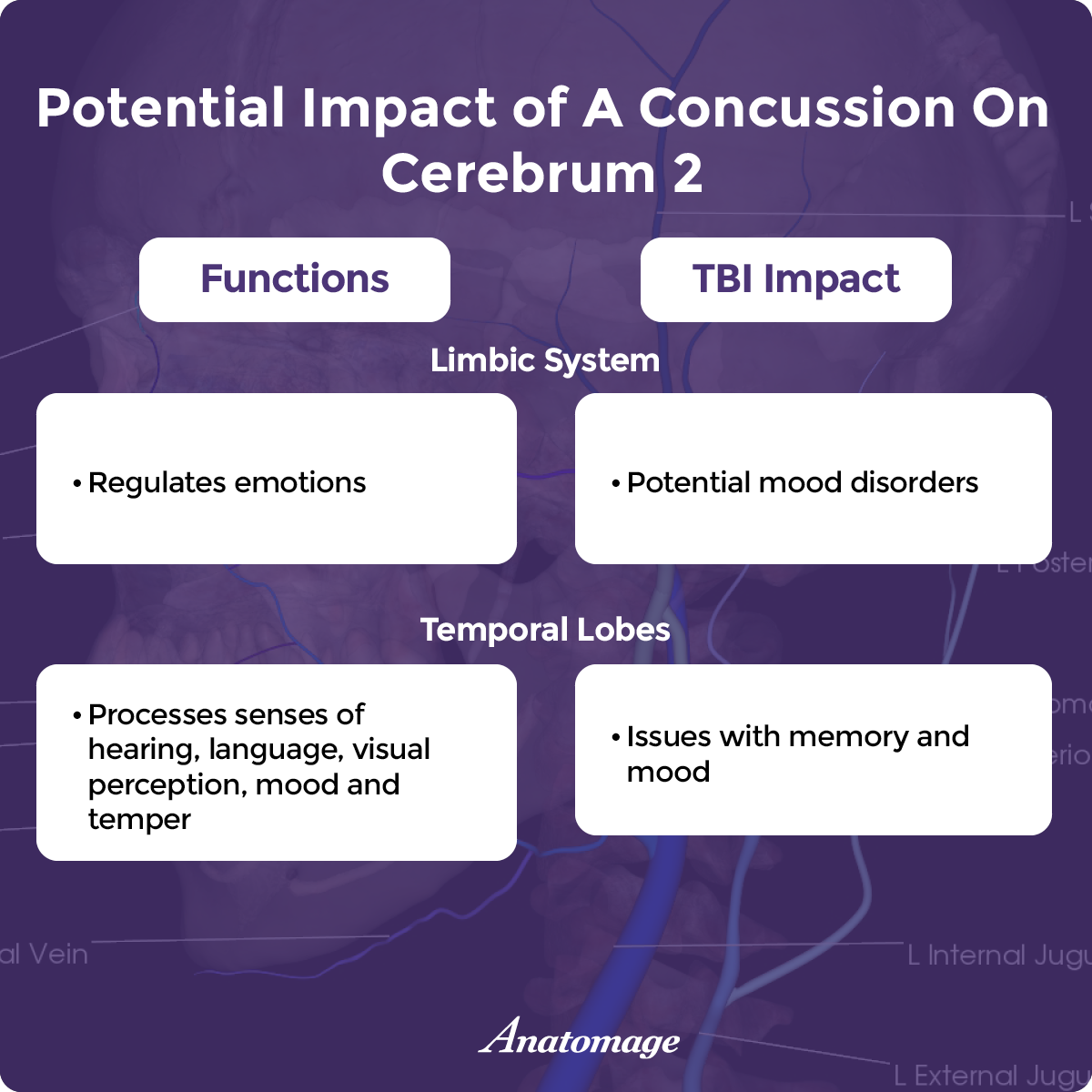 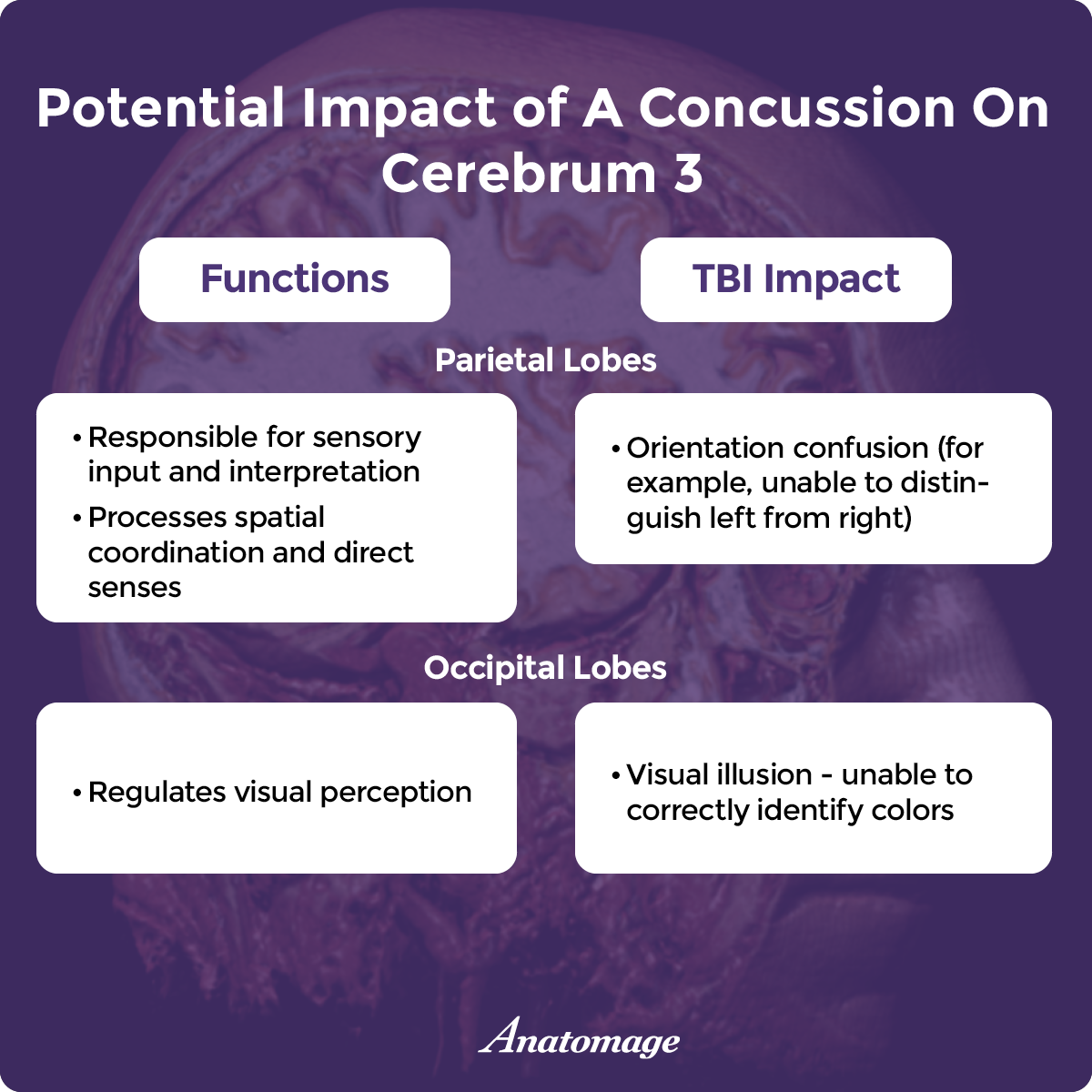 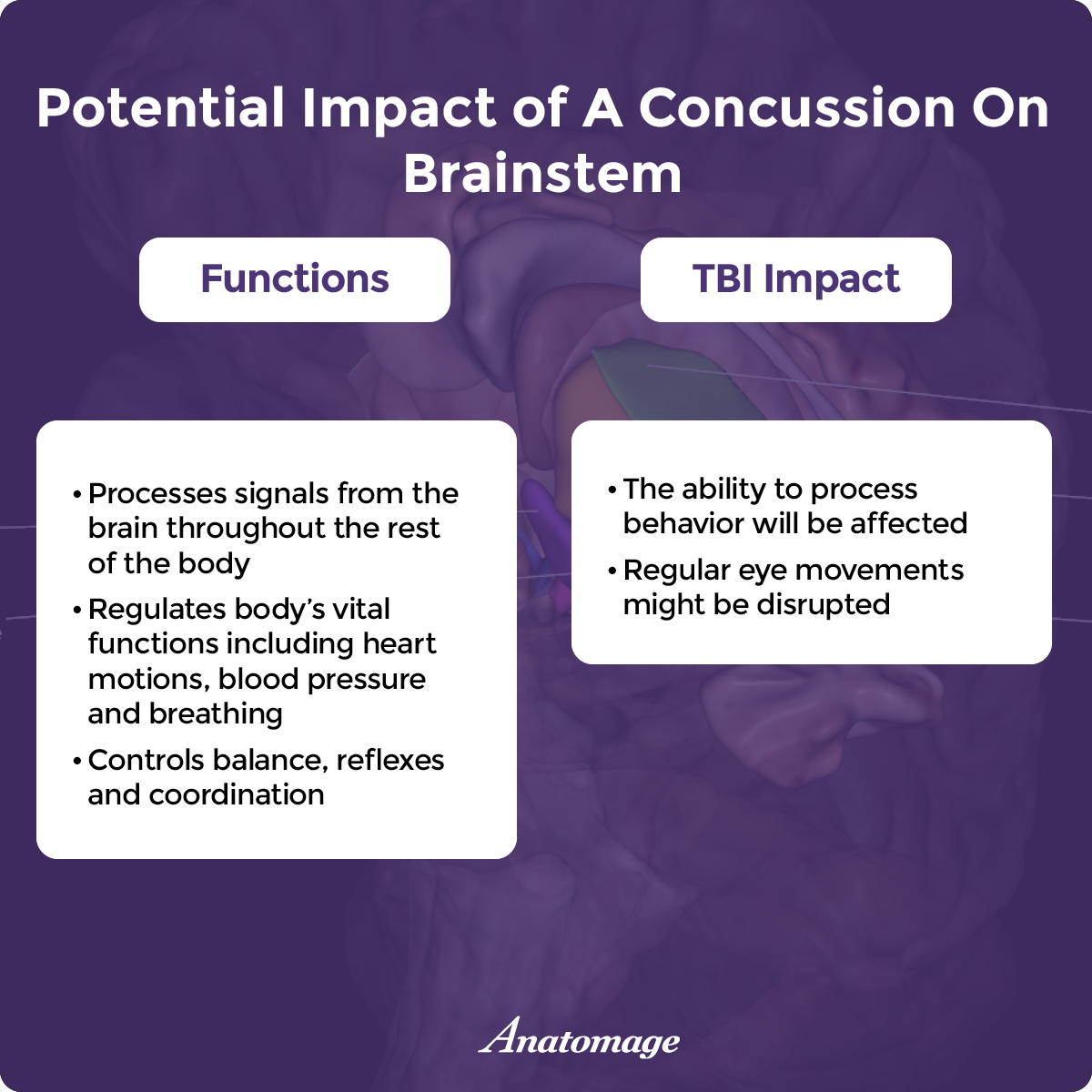